skip to main | skip to sidebar

Is anybody out there still listening?
Posted by Kristin at 8:10 am No comments:

Well, not overseas away, more like away with the fairies. I've been messing around with fiction, with blogging with less boundaries and it's all a little heady and sugary and I need something to get the taste out of my mouth.
I need vegetables. I need to get back to blogging about food.
I even have a shiny new camera! Ryan bought me one for Christmas, a point-and-click so I wouldn't have to keep grumbling about how I can't use his SLR. He's taken more photos than I have.
We have a garden now! A veggie patch with an insanely productive basil plant and an accidental eggplant. I've got some great recipes for making eggplant seem like something Ryan might like. And I've made a heap of pesto.
I am actually wishing for the routine of food blogging again, but kind of embarrassed that this poor blog is so neglected. I almost tossed it in for a new one, but I can't bear to abandon it just yet.

So here I am, hopefully back for a little longer this time.
Here's what I think we'll eat this week:
- sweet potato soup
- chops marinated in plum sauce with green beans
- pesto roasted chicken with roast veggies
- pasta with more pesto
- freezer fish and salad from the garden
Happy Monday!
Posted by Kristin at 12:51 pm 1 comment:

We've finally got into our house, with it's lovely 80's kitchen. It's so much better than the orange 70's kitchen in the last house! I had to celebrate by having people over for dinner.
Only two people, actually, because we don't have a proper table yet - we're using our outdoor furniture inside. But I thought I'd try it out anyway.
It was a weeknight, so I wanted simple. I did a lamb roast with lots of roast veggies (carrots, pumpkin, sweet potato, beetroot) and green beans. The oven behaved beautifully - apart from letting out a lot of steam. I think I need to do something to the seals. Mental note - cook lamb roast for 40 minutes per kilo and turn it during cooking. Success!
For dessert I wanted something suitably traditional to go with the roast, and thought about a chocolate self-saucing pudding. Then I remembered this apple dumpling recipe.
It was a bit silly, really, to be cooking a new recipe in a new oven - especially since I only started assembling the dumplings just before my friends arrived. But it was absolutely worth it! The dumplings rose a lot, and completely filled the dish. They were golden and lovely on top, and the apple was cooked but not mushy inside. The original recipe called for golden syrup, which was hiding somewhere, and I added an extra egg, too. I hope you like them too!

Method:
Rub butter into flour. Beat in eggs. Add milk, and then mix into flour to form a dough.
Divide this mixture into 8 pieces and roll out, fold around each quarter of apple, place into a greased casserole dish. Pour over hot syrup. Bake uncovered at 180 for 30 minutes until golden brown and cooked.
Serve with lemon curd icecream : )
Posted by Kristin at 5:48 pm No comments:

So did you miss me? Life has taken a few.... detours... since I last posted to this blog. I hope you've been eating well and having fun in the kitchen. I had a couple of months of complete disinterest in food (I think it's called morning sickness) but I seem to have my groove back. So lets see how we go this week!

I know it's a lot of chicken, but I've found a lot of good deals lately.
Happy Monday!
Posted by Kristin at 11:18 pm 2 comments:

We love cheese. No really. On any given day, you'll find six or seven types of cheese in my fridge. Normal 'block' cheese, parmesan, cheese for crackers, cheese for cooking, cheese for raclette... you name it, we buy it. A little while ago, the lovely people at Perfect Italiano sent me more cheese to play with - parmesan, pizza cheese and LOTS of ricotta. I don't normally use ricotta, so this was the first recipe I tried. We ate them for dinner with green beans and kangaroo steaks. They were great! 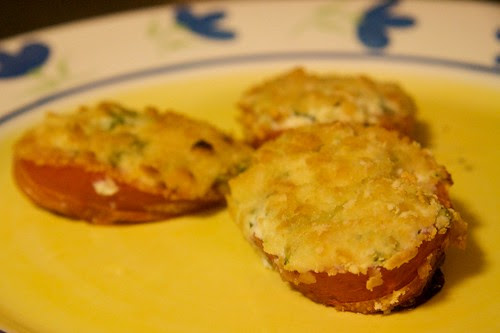 Ricotta-stuffed tomatoes
3 roma tomatoes, halved
6 tablespoons ricotta
3 tablespoons fresh coriander, finely chopped
3 tablespoons fresh basil, finely chopped
1 clove of garlic, finely minced
6 cheesy crackers (I used jatz)
Pre-heat the oven to 200 degrees. Scoop all the seeds out of the tomatoes, salt the insides and let them rest upside down (to get as much moisture out as possible). Combine the ricotta, herbs and garlic. Crush the crackers to crumbs. Stuff the tomato halves with ricotta mixture, dip face down in the crackers and arrange on a baking tray. Drizzle with olive oil and back for 20 minutes, or until golden brown.
This recipe is easily expanded - just include a tablespoon of ricotta for each tomato half.
Posted by Kristin at 11:31 pm 3 comments:

It's all his fault

He left town in a hurry and emptied out the contents of his kitchen onto our kitchen floor. Stuff I'd never cooked with, like miso paste and small dried fish. But also 5 containers of sorbet, and a selection of frozen proteins including salmon and a lamb roast. My cupboards got completely overwhelmed, and they weren't exactly empty to begin with.
Oh, and did I mention I haven't been cooking much lately? And the fridge had an odd smell to it? It was time to go through everything and figure out what the heck I had.
And then the Kitchn Cure appeared.
So I'm a bit late, but I've decided to take part any way. 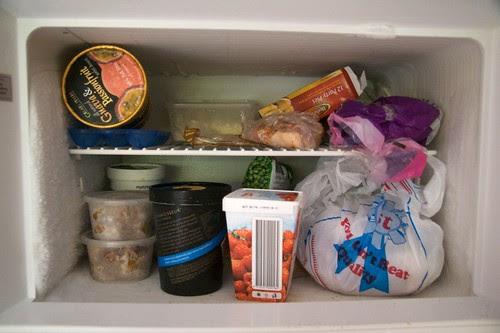 The freezer! I have 6 sorts of icecream/sorbet! Please ignore the party pies. I believe there's some chicken nuggets in there, too... moving right along.. 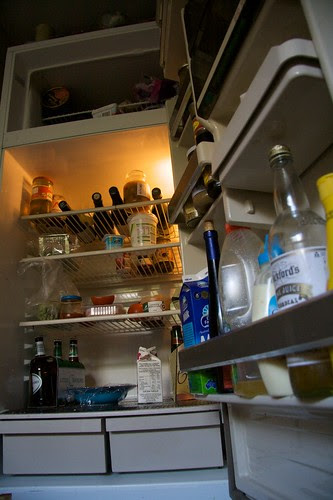 The fridge. It's pretty empty because it's the end of the week. That's my story and I'm sticking to it. And I only just noticed all the alcohol... 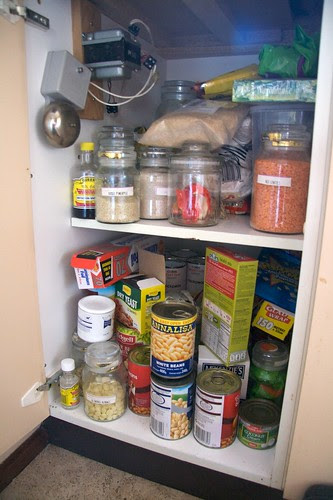 This cupboard is the worst one. I have no idea what's at the back. And yes, that is a jar of sesame seeds labelled 'Dried Pineapple'. The odd contraption on the left is actually our doorbell.

I didn't throw out as much food as I thought I would. There was a couple of bags of dried fruit, some molasses and tamarind paste... but most of the food was still edible (thank goodness!). I found three open containers of bicarb soda. I still have four types of sorbet and icecream in the freezer. I'll post the after pictures tomorrow.
Posted by Kristin at 1:15 pm 5 comments:

We spent Saturday climbing outside of Nowra, until it got too hot. Ryan had a hankering for fish and chips, so we decided to drive the long way home along the coast to Bateman's Bay. We didn't get very far. We found Currarong.

View Larger Map
It's a tiny beach town with a Post Office, a general store, and Zac's Place, all in a row. Zac's Place was pretty empty at 3pm, but the woman behind the counter was friendly. She talked us out of getting the snapper, suggesting instead a cheaper local fish, fresh that day. I hate stodgy batter so I chose barbecued, but Ryan had faith and got his fish battered.
We took our parcels of fishy goodness across to the beach. After a hot afternoon's climbing, we wanted shade, and there was a beautiful pavilion. Anything would have tasted good in that place, looking out across the bay, but our dinner was amazing. We each got two pieces of fish and more than enough chips. My fish was perfectly cooked, and the chips were fantastic. But I looked longingly at Ryan's dinner. The batter was lovely and brown, and not greasy at all. Salty but not too much. Crispy without being over cooked.
Hands down the best fish and chips ever.
We may have to go back next weekend.
Posted by Kristin at 7:08 pm 2 comments: